Here is the nomenclature for technical terms introduced in this guide:

You can perform your own evaluation and replicate our results by following the Serving Testbed guide.

To measure the baseline performance, we created an inference service with a single replica without the Istio sidecar, by adding the following annotation in the istio-proxy sidecar:

We tested this on a node with 64 CPUs and allowed Triton to use pretty much all of them:

We noticed that Triton was using only half of the available CPUs. 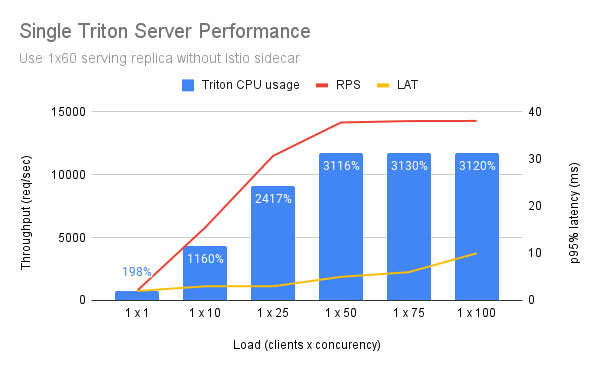 We tested how Triton behaves with multiple replicas per node, aiming to fully utilize big nodes.

We noticed that, for more replicas, as load increases, the performance degrades. The reason for this performance degradation is process contention. This is orthogonal to the CPU limit we set. Specifically, on a 64 CPU machine, Triton will spawn 240 threads, that will all compete for a CPU share. By putting more replicas on the same node, we ended up having more context switches so the “useful” CPU usage decreased.

This section describes the computational overhead on both default and modified configurations as compared to the above baseline.

To compare with the baseline we

By default istio-proxy is capped at 200% and becomes the bottleneck. As such, you cannot achieve more than 5K RPS while latency reaches 30ms. 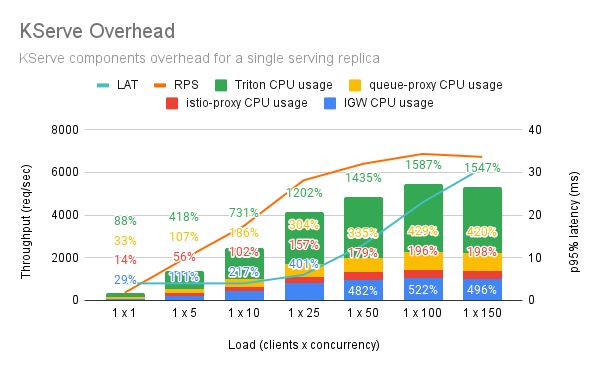 This section represents the outcome for the performance of a single Service Pod with Serving and IGW Pods running on different nodes. 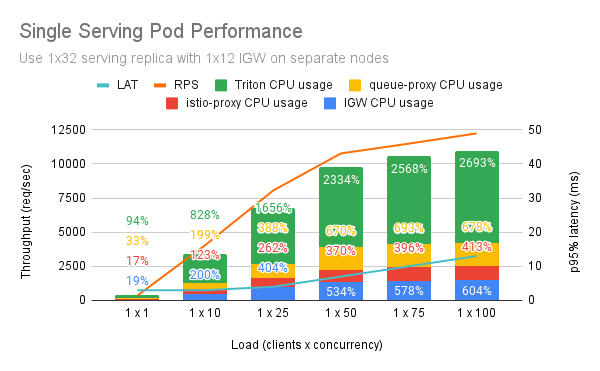 Hence, with proper configuration you can manage to reach 10K RPS with 10ms latency.

If you co-locate serving and IGW Pods, you will get less RPS with more IGW CPU usage. This is related to process contention as well, since IGW will spawn 2 x CPU threads and will compete with the ones of Triton. 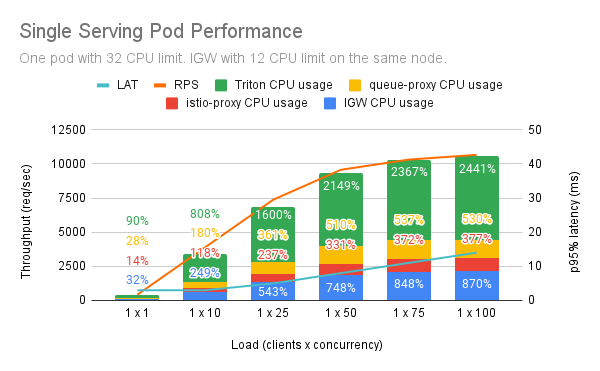 We started with a single serving replica with 20 CPU limit, a single IGW with 8 CPU limit on a single node. We treated this as a building block. We kept adding nodes while increasing the load. We started with 1x50 load (hey clients x concurrency).

The above experiment mimics a real-world scenario where you want to saturate bigger nodes, by co-locating IGW with serving replicas. Here is the outcome. 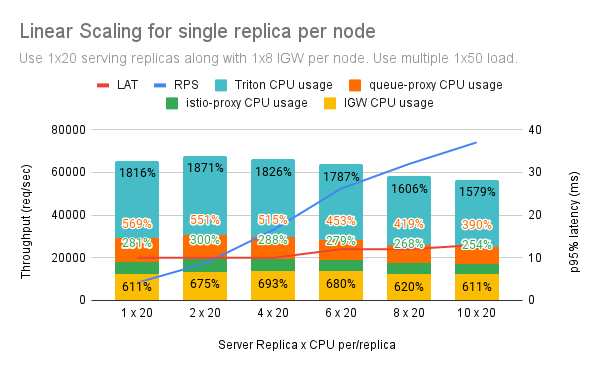 Here are some preliminary results using:

In this guide you gained insight on the performance evaluation of the EKF Serving component and how it performs better if you have modified your inference service setup properly.

The next step is to create a testbed if you want to reproduce the performance measurements yourself.