To scale applications running on Kubernetes and assure Quality of Service (QoS) one needs to gain insight on how these applications behave once deployed, observe their performance at any time and detect anomalies as soon as possible.

In this direction, Rok ships with a full-fledged monitoring stack that uses Prometheus as collector and time series database and Grafana for metrics visualization and analytics. The goal of these services is to increase system observability, help users detect patterns, and facilitate debugging.

Rok Monitoring Stack is based on the open-source Kube Prometheus project and consists of the following components:

Prometheus is a full-fledged, widely adopted monitoring system and time series database built using an HTTP pull model. It includes a dimensional data model based on labels, a custom query language named PromQL, and an alerting system called Alertmanager. Prometheus is a graduated project of the Cloud Native Computing Foundation. 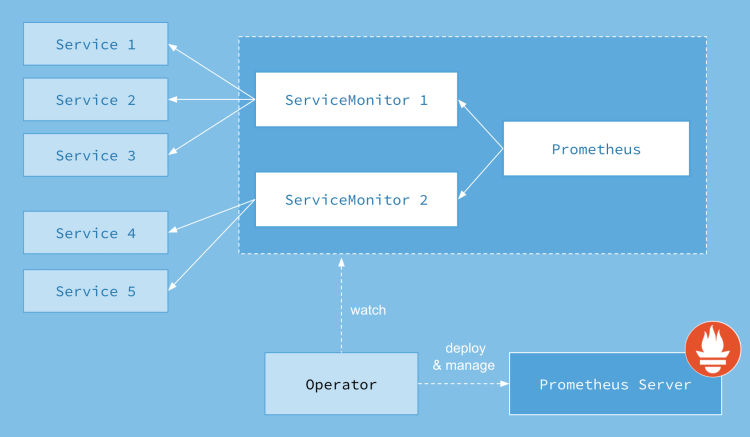 The monitoring stack that runs alongside Rok does not yet include Prometheus Alert Manager and Adapter. The configuration of these components depends on the needs and characteristics of each installation.

Since the deployment of Rok is leveraging Kustomize and kubectl, we maintain an opinionated collection of manifests tailored for observing Rok and its external services.

Assuming that you already have your clone of the Arrikto GitOps repository, you can view the kustomization tree with Rok's monitoring manifests under rok/monitoring.

If you have already deployed Rok, then you have also deployed the Rok Monitoring Stack along with its other components. In this section we describe how Prometheus monitors your physical nodes, Kubernetes, and Rok's external services.

To monitor the physical nodes (or cloud VMs) that host Kubernetes and, in turn, applications running on it, we need a way to gather and export critical system metrics in order to expose the overall state regarding CPU usage, memory consumption, disk I/O, network traffic, and other resources. The standard way to achieve this in a Prometheus-based monitoring stack is to use the Prometheus Node Exporter, which runs a set of collectors for both hardware and OS metrics exposed by the kernel.

The Rok Monitoring Stack deploys Node Exporter as a DaemonSet on Kubernetes so that it can retrieve system metrics from all nodes.

To make Prometheus aware of the Node Exporter and configure it to collect node metrics periodically, we use a ServiceMonitor resource for the Node Exporter service (node-exporter.monitoring) which looks like the following:

To monitor Kubernetes we need a way to gather and export metrics from core Kubernetes components, such as the API server, kubelet, scheduler, controller-manager, coreDNS, etc. These components already collect and expose metrics in the Prometheus data format via a Kubernetes Service.

cAdvisor is an open-source agent that is integrated into the kubelet binary that monitors resource usage and analyzes the performance of containers. It collects statistics about the CPU, memory, file, and network usage for all containers running on a given node (it does not operate at the pod level).

In addition, we need to gather and export metrics from Kubernetes resources, such as StatefulSets, DaemonSets, PersistentVolumeClaims. The standard way to achieve this in a Prometheus-based monitoring stack is to deploy kube-state-metrics in the Kubernetes cluster to be monitored. Kube state metrics focuses on generating completely new metrics from Kubernetes object state. It holds an entire snapshot of Kubernetes state in memory and continuously generates new metrics based on it.

To this end, to make Prometheus aware of Kubernetes metrics (both from core components and resources) the Rok Monitoring Stack creates a ServiceMonitor resource for each Service that exposes metrics to be collected.

You can view all ServiceMonitor resources by running the following command:

Rok depends on external services to operate. Namely, it leverages

To allow Prometheus to monitor these services, that is, scrape respective targets to collect exported metrics periodically, the Rok Monitoring Stack creates proper RBAC resources so that Prometheus is allowed to get, list, and watch Pods, Services, and Endpoints in the namespace where Rok is deployed.

To make Prometheus aware of the Rok etcd and configure it to scrape metrics periodically, the Rok Monitoring Stack creates a ServiceMonitor resource for the Rok etcd service (rok-etcd.rok).

To make Prometheus aware of the Rok Redis and configure it to scrape metrics periodically, the Rok Monitoring Stack creates a ServiceMonitor resource for Rok's Redis metrics service (rok-redis-metrics.rok).

The integration of Istio with Prometheus is a work in progress.

Rok is natively integrated with Prometheus, that is, it serves the /metrics endpoint to expose metrics to the outer world, including the Prometheus server that scrapes this target periodically.

At the moment, Rok exposes the following aggregated, application-level metrics through its API:

In this section we describe how you can view the metrics that the Rok Monitoring Stack collects, as well as Prometheus configurations and rules.

Prometheus offers a web UI that enables you to view simple graphs, Prometheus configuration and rules, as well as the state of the monitoring endpoints.

Grafana offers a rich web UI that allows you to view or create dashboards with metrics retrieved from a multitude of datasources, set up alert rules, and perform other actions. The monitoring stack that accompanies Rok ships with certain dashboards that are pre-loaded and available upon deployment.

It might take some time before metrics become available in dashboard panels. This depends on the scrape interval of each Prometheus target.

Check out the rest of our user guides.